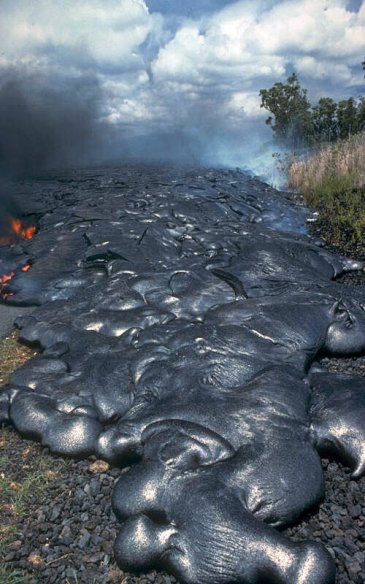 Tillie stood and watched the house burn as the lava flow finally overtook it.  Everyone knew it was coming for months and months.  It was still not enough time to plan for a disaster in slow motion.  It was too late now.  The disaster was here and there was nothing to do but watch.  She was in no personal danger.  She could walk away from the lava.  Nothing else could.

The greedy lava had been eating up everything in its path since June.  Standing on the edge of November it was nearly a relief to have the lava finally here.  The anxiety has come to a head.  No more worrying about what may happen.  It has happened.  The house was burning.

It felt like she was in an oven.  The heat was inescapable.  The molten lava just kept on coming and coming.  It took down everything in its wake.  Trees and entire forests were gone.  The lava had overtaken the Buddhist Cemetery yesterday.  The cemetery was completely gone.  Where was she supposed to go to mourn her father’s bones now?  The were less than dust now.

Tillie knew the risk when she bought the house.  She had to sign the Lava Flow clause and buy the extra insurance.  She knew the danger, but she never believed it would happen.  Kali Ma always kept the lava flow to the south.  Why would the lava go north?  The risk seemed worth the reward.  It was an island paradise.  The lack of snow and ice made the lava in the south a minor annoyance: less troublesome than a moth or butterfly.  Until the lava flow changed…  Nobody knows why it changed, not even the volcanologists who live in Volcano, Hawaii and monitor the volcanoes 24 hours a day.  The lava came north.

The officials allowed Tillie to stay outside the barricade and watch her home go up in flames.  The unceasing lava just kept coming, a writhing mass of black and red destruction.  The fire wouldn’t spread, the lava was just going to gobble that up too.  Smoke billowed out of the mouth of the dragon.  There was a stark contrast of the shiny, obsidian, already cooling lava on top and the radioactive red, killer lava that kept pouring out of the black at the inconceivable temperature of 2000 degrees.

Tillie thought about the amount of time it would take for this lava flow to finish its run to the sea.  How long until the Earth reclaims the newfound ground and turns it to soil and land?  Eons.  It will be eons before someone will live here again.

Everybody wondered if the town could be saved.  Tillie’s house wouldn’t be.  The lava was coming and it was unpredictable.  Nobody knew what would burn until it did.  One arm of the flow might peter out and another grow angry and molten red.  The ooze moved with deliberation.  “The Flow is gonna do what the Flow is gonna do” became the town’s mantra.  At least the waiting was almost over.  The house was ablaze and it would soon be gone.  It would burn to the ground and be overtaken by the lava beast.  You wouldn’t know there was ever a house there.

You cannot stop the lava.  It’s not a hurricane you can pray will pass and the eye of the storm will blow off to somewhere else.  You can hope the snow won’t fall and the ice eventually melts.  Earthquakes stop.  Lava laughs at you.  You can only stand there and watch it burn.  It was the ugliest thing she’d ever seen.  It was hypnotic.  The lava was ugly and beautiful and destructive.  It was creating new land from the depths of the Earth.  These Hawaiian volcanoes are working volcanoes.  They make islands.  The lava is eating up the village, but the island will be bigger because of it.  It is a paradox within a disaster.  Nobody knows where the flow is going to go.

Tillie knows.  The lava will destroy her.  Her waiting is over.  There is a kind of relief wrapped in her grief.